A perfectly preserved picture of 1990s decor, this Portland master bath was anything but modern. And the homeowner was ready to trade it in for a serene and updated retreat that could rival any high-end spa. 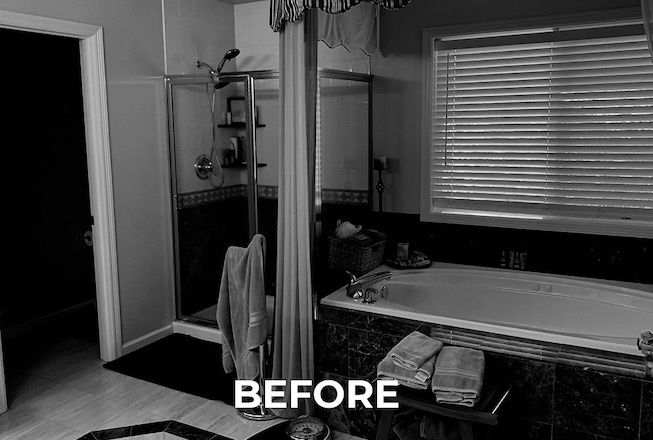 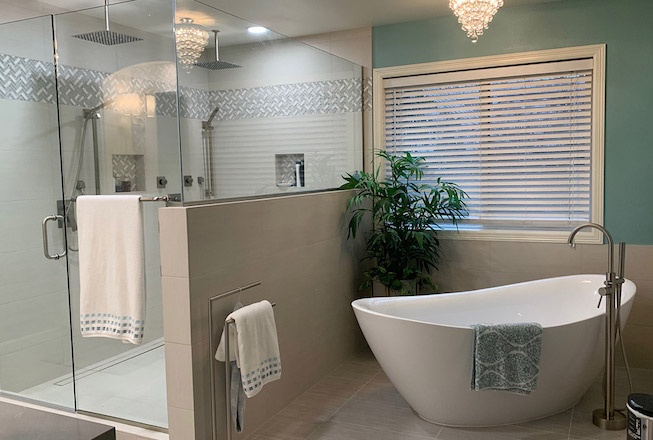 What may have once been considered luxurious - a shower framed in gold aluminum, a trio of vanity mirrors framed by Roman Doric inspired columns, and a built-in jacuzzi tub shrouded in drapery - was now just aggressively 90s. And the owner of this single-family Cedar Mill home wasn’t keen on preserving this era in her bathroom.

She thought it dark, unwelcoming, and dated, which isn’t how you want to describe your master bathroom. What she wanted was a place to escape. Something fresh, inviting, and less masculine; something evocative of the City of Roses’ namesake.

Ready for the bathroom of her dreams she reached out to Portland Renovation Consultant, Chris Kuhr. After discussing her goals during their initial consultation — the first stage of the 5-step Refresh process — Chris got to work determining how best to achieve them.

Chris managed the project from design to build, beginning with the concept drawings. A new vanity area and a spacious double shower were the homeowner’s top priorities. So to get started, Chris drew up a few design options revolving around these elements. Confirming these two foundational aspects allowed Chris to solidify the plans and finalize the budget.

Initially, Chris estimated remodeling the master bathroom would cost $59,400 but, at this point, the homeowner requested some additional work. She wanted the tile flooring to spread into the master closet as well as refinish some of the flooring on the living level. Extending the scope of the project brought the final total to $63,495.

For the construction stage, Chris organized contractors from his reliable network of professionals. First in was the demo crew, followed by framers, tilers, and plumbers. Nearly a dozen different laborers were called in during the build, coordinated and scheduled entirely by Chris.

The Refresh project management process meant Chris also took care of the plumbing and electrical permits to ensure the bathroom was built to code. This comprehensive approach to renovations allows homeowners to stay completely hands-off until it’s time for them to enjoy their new space.

As work continued in the bathroom, Chris’ team also refinished the maple flooring in the kitchen and entranceway. Even though the scope was originally just for the master bathroom, it was easy for Chris to action the flooring request as well, given his connection to a wide network of professionals, reinforcing Refresh is a “one-stop-shop” when it comes to renovations.

While the homeowner had no definite timeline expectations, Chris projected the renovation to be complete in approximately two months. Uncontrollable factors, such as supply chain and other COVID-19 related issues, delayed the process, but Chris searched for viable substitutes that were more readily available without compromising the result. This enabled Chris to deliver the finished project in 12 weeks.

Removing the bulky, built-in jacuzzi was no doubt the most impactful change made during this transformation; without the curtains and dark tiling, the bathroom is filled with light. A contemporary soaker tub with soft lines brings an organic elegance to the space, with an understated glass drop chandelier enhancing the effect.

By simply repositioning the doorway to the toilet and removing the third vanity, Chris was able to give the homeowner a massive double shower with a total of four showerheads, two rainfall and two handheld. The elongated drainage integrates seamlessly into the sleek profile of the shower.

Despite getting rid of one-third of the vanity space, there’s no lack of storage with the remaining double vanity home to sizeable drawers and cabinets. A gray countertop is consistent with the overall color scheme, while herringbone accent tiles are on display behind the mirrors and in the shower. The walls feature their own pop of color, a calming blue chosen to enhance the peace and tranquility of the master bath.

Chris delivered a timeless design, resulting in a modern space that exudes relaxation. He says: “The bathroom came out great. I love the large shower and really think the grid layout on the floor tile gives the space an updated look.”

A far cry from its dated predecessor, the new master bath delivers the fresh, inviting, and elegant look this Portland homeowner was after. 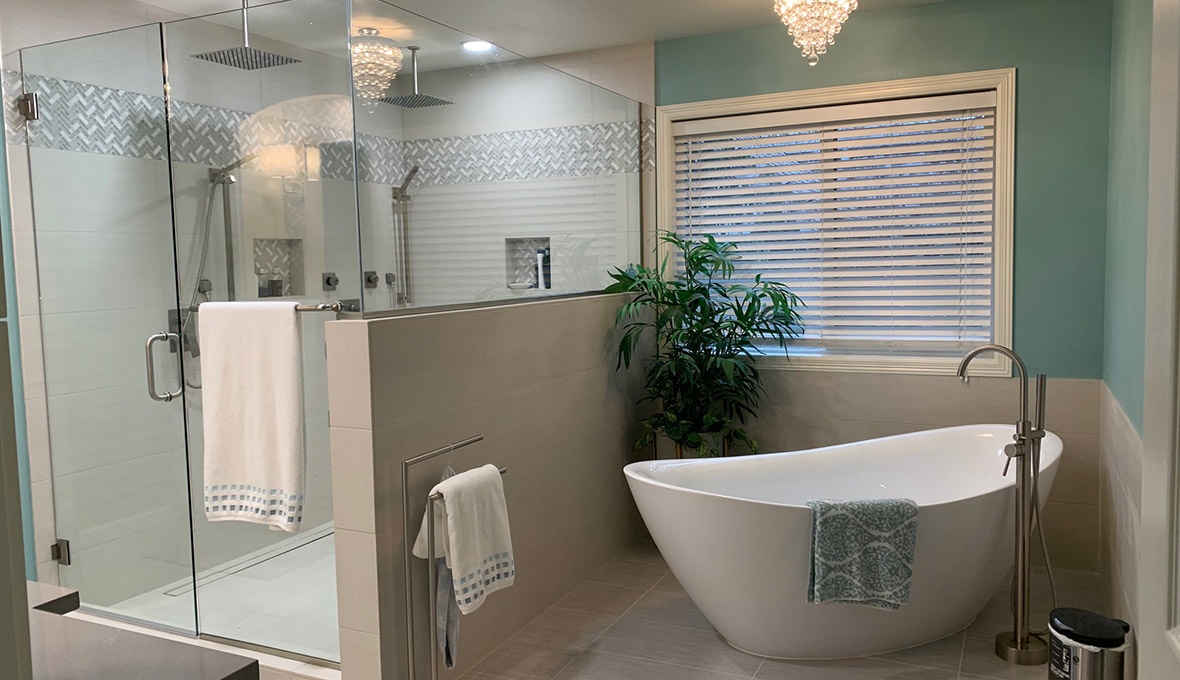 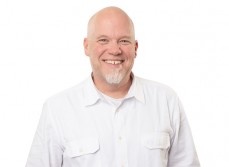 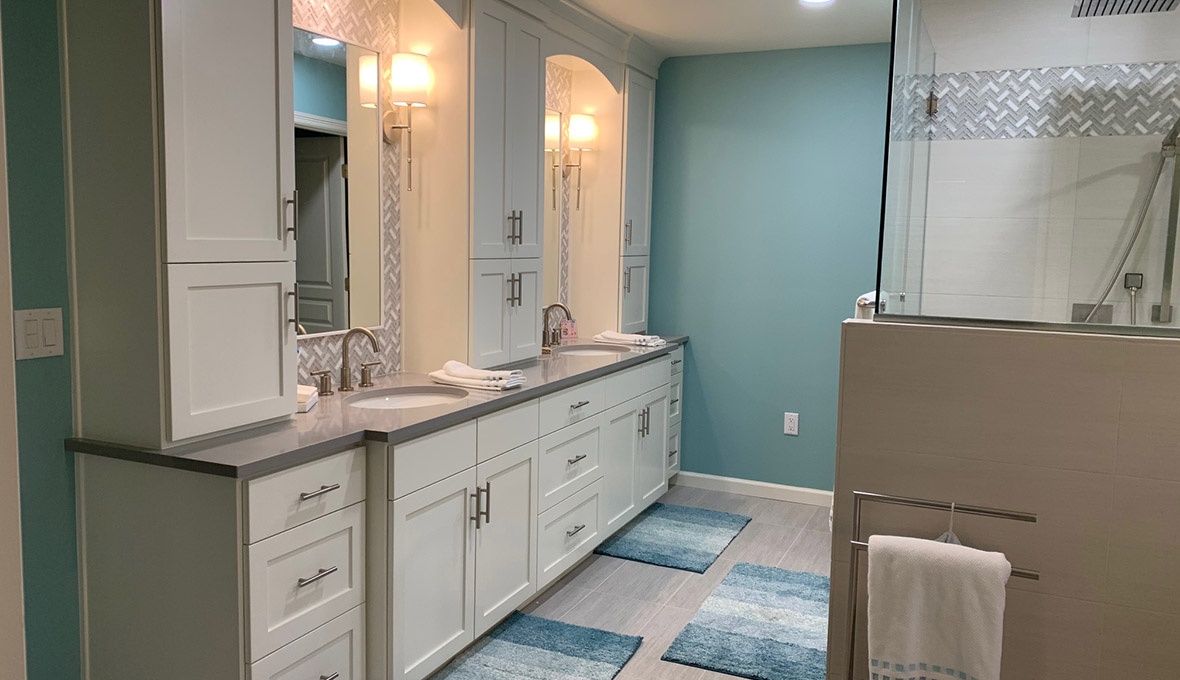 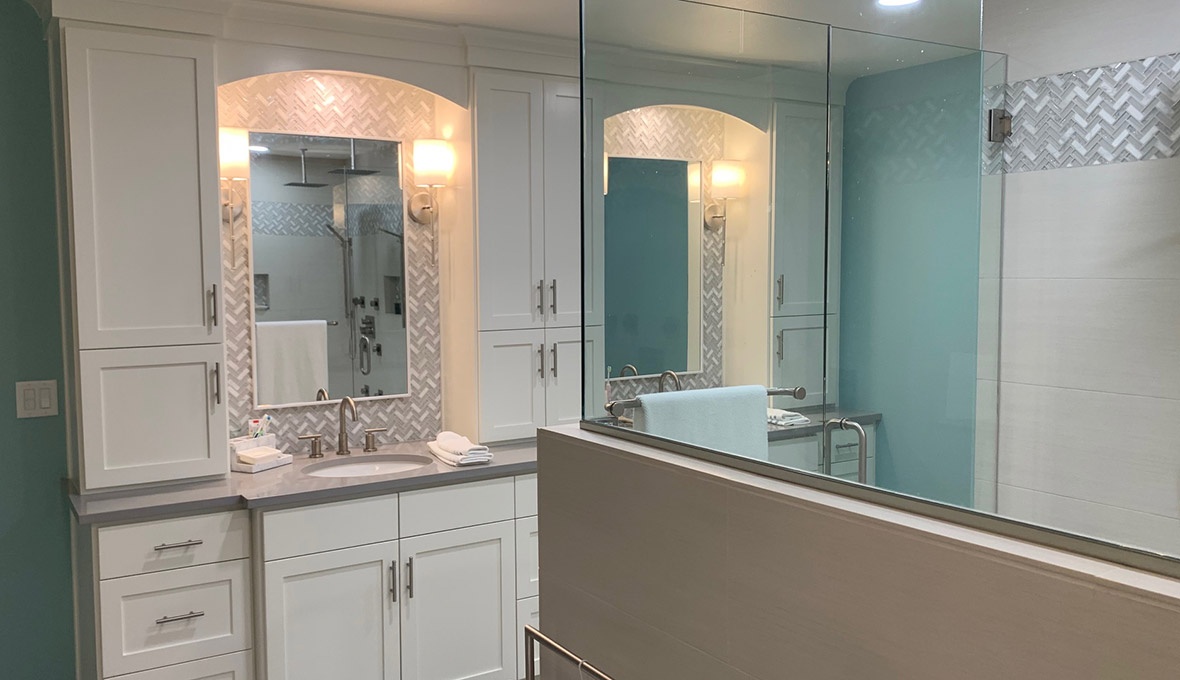 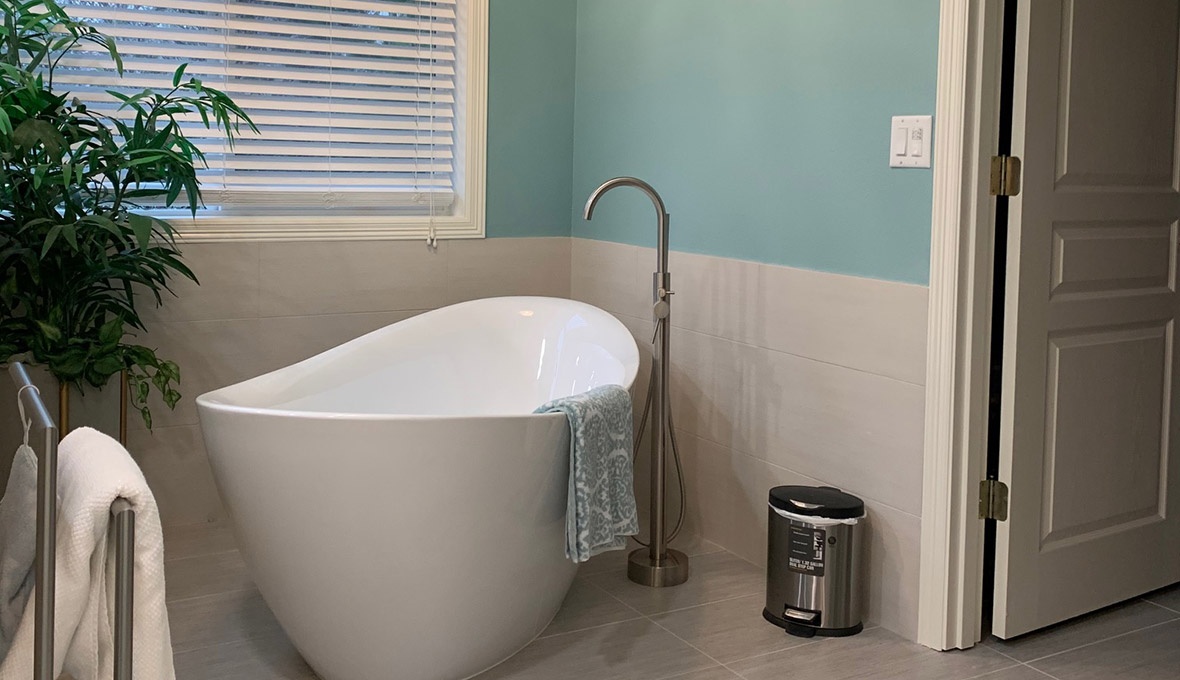 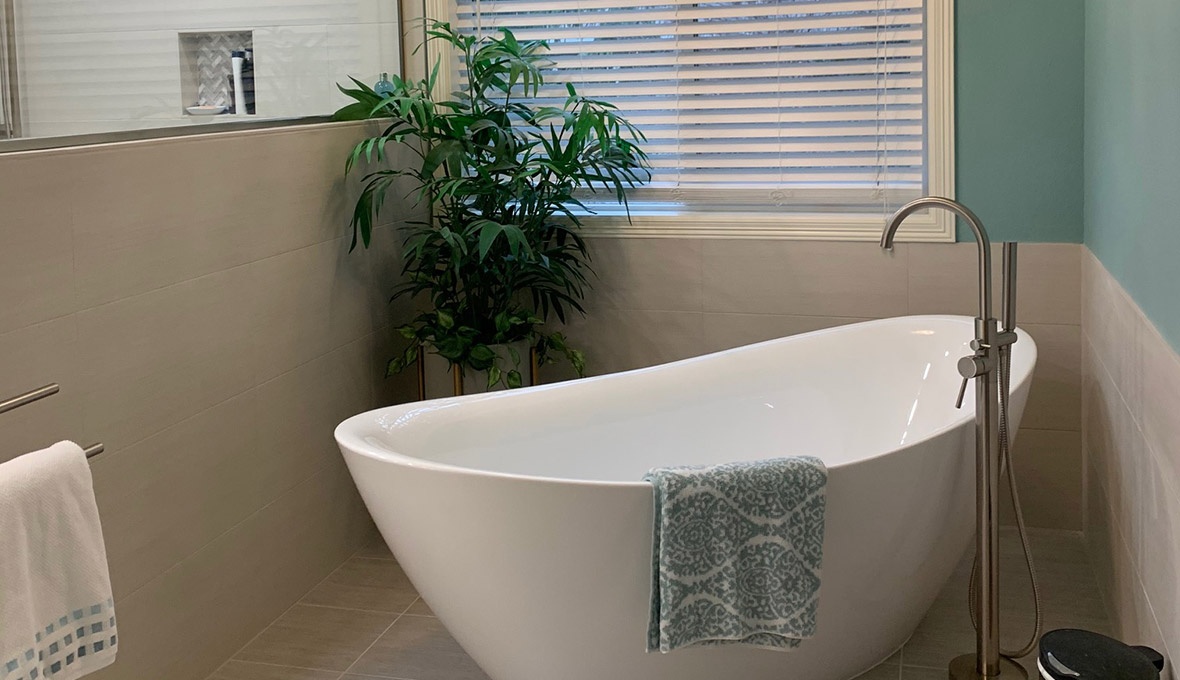